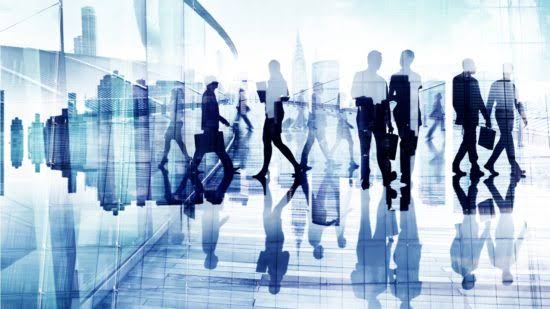 With food, after going towards styles that needed kitchens looking more like laboratories, we are now seeing a return to the hearty type of food that grandma used to cook. Mobile phones started big and heavy, then went small and flip, then bigger again with touchscreen and shout-outs to retro Nokia. As for music, I can’t think of many good new tracks that don’t include samples of songs from the past. Oldies and goodies. High end fashion designers as well, surprise, surprise, once again going bespoke and tailoring to individual needs and preferences.

Since the industrial age, work has largely meant companies contracting with people, on the basis of them exchanging their time for money. The companies eventually put in place things like performance management to try to make this time productive to them but judging from another trend of companies moving away from performance management, this may not have been as successful. Most research suggests that full-time employees are productive for less than half of their regular working hours.

In keeping with the general trend towards individualisation, however, initial shifts are taking place across workforces that will become tectonic ones over the next decade.

Remote work, flexible work, job sharing, freelancing, are all booming across the globe for various reasons, some of which are connected to the fact that these make business sense to the companies, but also because they reflect the preferences of individual workers.

With the democratisation of, well, virtually everything, propelled by technology and the digital era, this dynamic is reversing. Talented individuals started saying no to fixed working hours, exclusivity of effort, long commutes in polluted and congested centres, exposure to high stress causing health issues, and instead chose to work on their own terms. Their typically technology employers said, why not? Thus, setting the start of market practices which other employers outside the technology sector had to start taking notice of, to compete for talent.

In the first wave these forced employers to relax the rigidity of fixed working hours by adopting flexible work practices. This was slow going, because the old guard of corporate leadership didn’t trust their people enough to believe that they had the ability to work when not physically at the office.

The next wave was the adoption of contingent options to fill talent gaps through independent contractors and consultants. This was more palatable to the old guard, because they had documented legal recourse. If only they read the fine print of limited liability!

Now we are in the middle of a freelancer / gig worker / digital nomad phenomenon where physical space no longer has relevance to the ability of an individual to work. This may have started by individuals who opted out of the so-called rat race, but companies have swiftly woken up after seeing the related corporate benefits, and many have incorporated contingent workers into their own workforce management strategies and policies. The old leadership ranks, now heavily eroded as millennials grow up and rise through corporate ranks, can smell the opportunity of reduced operating costs so are less resistant. Relatively speaking of course, since they still enjoy the power of control.

Tantalisingly, could it be that companies are ever so slowly shaping their policies according to the individual needs of their people? Is such a dream from five years ago starting to take shape?

A career reward expert friend of mine has for as long as I can remember been repeating to me how he is trying to build reward systems that cater for what he calls, a segment of one. Earlier in his career, this was less viable due to the onerous administrative requirements, but with technological advancements he is convinced that it is not just possible today but can create business value.

Propelled by technology and digital solutions, we are on the verge of a world of HR where each employee can have a say on how to be rewarded, managed and, yes, when where and how to work. Companies will have to change their related policies unless they get left behind as the trailblazers of such practices start getting the best people as a result.

Yes, there will be challenges.

The employment law regime is predicated on the concept of a permanent full-time job, in the belief that this is what best protects worker rights.

Perhaps this holds true if considered at a single point in time, but certainly in the digital economy and in consideration of career management, the rights of workers are less dependent on full time work, as they are on gainful or meaningful contributions within communities.

The employment law landscape must be transformed in a way that considers the new economy while still ensuring that worker rights are upheld. Just in a different type of employment proposition.

The dominant corporate leadership style is probably the biggest stumbling block and will remain so until the dinosaurs are churned out of their decision-making roles. I am in no way suggesting that the dinosaurs are old people, rather which they are the ones with old mind sets. Some of the most dynamic proponents of digital work opportunities I work with, are those who have already retired.

It baffles me how the old (largely) boys’ club love the fact that they have big employee numbers, even though these massive workforces are less than half productive. Shouldn’t it be more impressive to their shareholders if they have larger margins, than large workforces? Maybe it is again a control issue, with their sense of power linked to degree of control. After all, some CEOs are still known to check time and attendance records of their people from time to time.

The times are changing, though, and as more and more millennials get into boardrooms, they will shape policy changes that they themselves are more comfortable with. Once this happens, I sense that increases in employee engagement will turbocharge corporate productivity as perceptions of lifestyle quality improve.

Imagine the number of commuters in Gauteng dropping by half overnight, with people already working during the times they would have been getting to and from work?

Imagine the reduction in carbon emissions as people stay home instead of trudging one hour each way, to travel 15 kilometres?

Imagine the improvement in individual stress levels as they become empowered to arrange their workdays around their families, instead of their bosses? Just eating breakfast together as a family is something that most people have forgotten about.

Individual employees determining the nature and essence of their own working lives will be a big factor in this economic and social impact improvements and this has the potential to move the needle on levels that may just rise to positively affect national GDP.

Emma is the founder of One Circle www.onecirclehr.com. An online platform connecting companies with freelance HR experts, on-demand. She formed One Circle in response to her own experiences, as an HR Director, of the limitations and restrictions inherent in the current consulting and employment models, as well as in anticipation of future work trends towards greater individualisation of career management. Emma realizes the potential impact that technology brings to the world of work, and coupled with her passion to democratize employment, One Circle is an obvious choice. Her objective is to improve and enhance quality of life through diverse work options, thus uplifting broader society by opening up global work opportunities, regardless of gender, age, location or social standing. She is particularly focussed on retaining experienced workers in the economy post-retirement.

Do you have a need that you’re struggling to fill? Word of mouth is the best recommendation. Let’s use our network in Talenttalks to share our connections and ideas. Join us for Needs & Leads on Friday 3rd July 2020 at 10:00. It’s free.