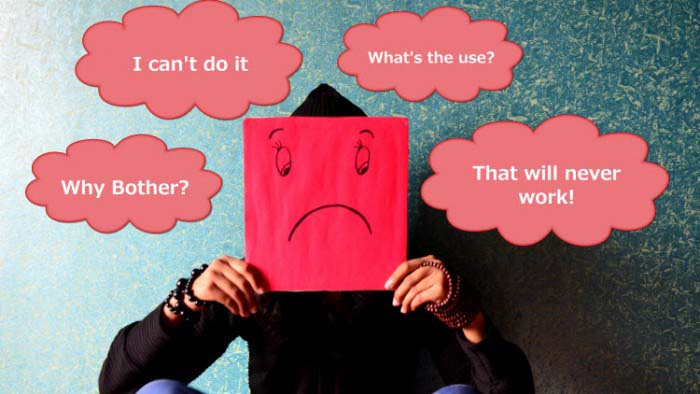 Stop learned helplessness from seeping into your organisation

“It won’t work” she said. “What would stop it from working?”

“You don’t understand,” she said. “Everything you say makes sense. I know what needs to be done. But I can’t.”

“So, what is stopping you?”

“Everything. I mean, nothing works here. You try to push ideas through. It doesn’t work. So many people tried to change things around here. Nothing works. They don’t want change. You are still new. You will figure it out yourself. But I’m tired of trying. Yes, I understand what you’ve suggested and, I understand that it’s best practice. Lots of people before you tried new ideas too. Nothing works.”

This is a discussion I had with a co-worker in my first month of joining an organization. It was as if I stepped into a tale of disempowerment. A few months afterwards, with me not giving in, we had made great progress. The team realized after digging deep into every operating process, that many of their “restrictions” were self-imposed, and that many streamlining changes were doable without having to wait or ask for approvals.

It is common practice to use external circumstances as reasons for not acting. Its an easy way out for managers to reel off excuses that release them from accountability for changes or improvements. So instead of finding creative ways to deal with regulations or budget cuts, they accept the status quo and blame external conditions.

“Can’t motivate people when we didn’t pay bonuses last year.” “Can’t find the right people with a limited budget.” “Can’t be accountable for staff turnover when my focus is to meet challenging targets.” Sound familiar? Of course, the list goes on and on.

Organizations to some extent contribute to this feeling of helplessness. Employees feel stripped of any power that can help them implement change or introduce new ideas.

In psychology, we refer to this as Learned Helplessness, the basis for several foundational concepts in positive psychology. The Learned Helplessness theory is the view that clinical depression and related mental illnesses may result from real or perceived absence of control over the outcome of a situation. When people feel like they have no control over what happens, they tend to simply give up and accept their fate. It’s the cousin of the more familiar performance management concept of Line of Sight. Paradoxically, having no control over an outcome has adverse effect, whether the outcome is positive or negative.

To use a workplace example, getting a small bonus for poor results one had no control over is just as bad as receiving a big bonus for good results that one also didn’t have a hand in.

The “bad” just manifests in different ways, but that’s a subject for another day.

What might get an employee to reach a stage of learned helplessness. and how does this impact the workplace?

To get the most out of their people, leading businesses try to empower employees to get them to work to their highest potential. It gives them a sense of power and control over their actions through detailed goal setting, performance milestones, robust targets, etc.

In doing so, firms are attempting to create awareness of the link between their efforts and related performance outcomes. In other words, employers are making employees responsible for their behaviour and then rewarding those who show signs of the most appropriate behaviour. However, these strategies have mixed results and certainly do not work with all employees.

One theory of why such empowerment may not work, is because some individuals exhibit learned helplessness behaviours.

How do people develop learned helplessness attributes and what role does organizational culture play in shaping negative thoughts and actions that impair performance?

The same organization that develops programs to motivate, boost performance, and get the best out of its people could be driving those same people to become helpless.

Employees who see minimal sanctions against transgressors in cases of, for example, workplace harassment or abuse of management power may perceive that nothing they do could change things. Their experiences and observations guide them to react passively when similar situations arise, as a means of coping. This is a typical example of learned helplessness. When an employee feels powerless in the face of unreasonable organizational behaviour, he may become stressed or depressed.

Learned helplessness then is adopted by the employee and flows to everything else.

In organizations where the culture makes it apparent that the authority of managers is absolute and that employees’ concerns will not be reasonably considered, employees learn not to complain, no matter how unreasonably a manager may behave. In this way, the employee learns to feel helpless in the face of unacceptable behaviour. He/she is unable to influence or change the situation and so does not take any action.

Another example would be organizations with operations or activities adversely impacting the environment. An employee who knows that his work has an adverse impact on the environment and cannot afford to leave the job will plunge into learned helplessness.

Learned helplessness spreads like an infection, managers pass on learned helplessness from group to group and level to level. Eventually the standard response to any initiative is some variation of, “We’d love to do that, but it won’t work.”

Many problems can occur when learned helplessness spreads in an organization. Unwillingness to work and effectively perform tasks; inability to engage in new and innovative thinking and practices; incapability to go beyond routine work and operations; merely carrying out what’s required; exerting effort as needed and not going beyond that; reluctance to develop oneself; low motivation; making an effort that is far below knowledge, skills and abilities required by the job.

Some organizations think of branding or CSR as a marketing activity. It is much deeper than that. They provide their own people with a sense of purpose and power over their actions, a sense of meaning to their work. Organizations that do this right have a lesser chance that its people fall victim to learned helplessness.

Organizations that act on their engagement surveys give power to the employees’ voice. Few will be saying ‘nothing changes around here’ or ‘it doesn’t matter what I say’. On the contrary, they will feel engaged, in control, empowered, and valued.

On the other hand, working hard for praise or a reward, can trigger a sense of achievement and the release of the happiness hormone dopamine. In the same way that learned helplessness is infectious, a happy brain feeling carries forward to other tasks and the motivation continues and spirals.

The whole idea of performance management is based on breaking down big organizational goals into achievable chunks, measured with frequent feedback and praise for wins. Those frequent ‘where are we against goals’ discussions should ideally be Dopamine Releasers leaving people energized, recharged, and in control.

The opposite of helpless.

How can your organization overcome learned helplessness?

Emma is the founder of One Circle www.onecirclehr.com. An online platform connecting companies with freelance HR experts, on-demand. She formed One Circle in response to her own experiences, as an HR Director, of the limitations and restrictions inherent in the current consulting and employment models, as well as in anticipation of future work trends towards greater individualisation of career management. Emma realizes the potential impact that technology brings to the world of work, and coupled with her passion to democratize employment, One Circle is an obvious choice. Her objective is to improve and enhance quality of life through diverse work options, thus uplifting broader society by opening up global work opportunities, regardless of gender, age, location or social standing. She is particularly focussed on retaining experienced workers in the economy post-retirement.

Nobody is born wise.