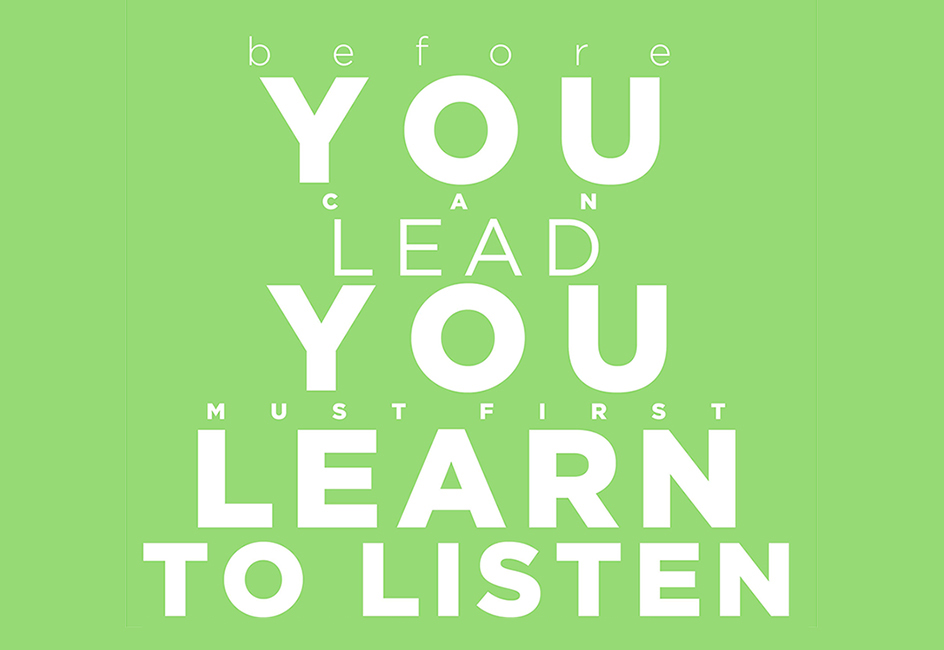 Listen, Learn, Lead: Tips for the Leader in the New Year

There is a well known story attributed to Viktor Frankl, the great psychiatrist who survived the Nazi concentration camp in Germany, in his book “Man’s search for Meaning”. In the story, he tells of a woman who called him in the middle of the night to calmly inform him that she had decided to commit suicide. Frankl kept her on the phone and talked her through her depression, nudging and coaxing her with reasons to carry on living. It seemed to work because finally she promised she would not take her life, and she kept her word.

When they later met, Frankl obviously asked her which reason had persuaded her to live. “None of them”, she told him. What then had influenced her to go on living, he pressed on…her answer was so simple – it was Frankl’s willingness to listen to her, in the middle of the night, with such earnestness. A world in which there was somebody ready to listen to another’s pain seemed to her a world in which it was worthwhile to live.

I had the opportunity to listen to the stories of some amazing people at the event called “Pathbreakers” organized by More Than HR Global (MTHRG), SABPP’s partner in India. I was particularly impressed with two speakers. One was Anand Shinde, who had co-founded the Trunk Call Foundation, a not for profit organization dedicated to the cause of conservation of elephants and their habitats. He is fondly also called “The Elephant Whisperer” – not for nothing – he has learnt how to communicate with elephants. More interestingly, they communicate back with him and almost treat him as one of them.

He shares in an article for the newspaper The Hindu, “These land mammals, the world’s largest, have the biggest heart, and brain”. What started as a chance encounter with the gentle giants in Kerala in 2012 — on assignment as a press photographer — has today evolved into a way of life. Recalling the life-changing experience that got him to start Trunk Call – The Wildlife Foundation in 2014, Shinde says, “It was Krishna, an injured calf who had got separated from his mother at the Kodanad elephant centre, who first tried to ‘talk’ to me. I recorded the sound and when I mimicked the ‘rumbling’ later, I got an instant reaction.” In fact, Anand mimicked the rumbling sound, for the audience gathered at the MTHRG event. No small achievement to do this, but how did he learn and master the skill of communicating with these pachyderms? By truly listening not just with his ears but also with his heart – he listened for their joys and pains, their delight and fears, their love and grief and much more. The eventual passing away of baby Krishna in 2013 shook him. “I realised we can’t lose them so easily. I wanted to do more and that’s how Trunk Call was born,” he says. He revealed that elephants communicate with over 10 different sounds inaudible to humans, and rumbling is just one such; they also converse through sound vibrations over a distance of seven kilometres.

Another speaker at the same event was an inventor of proven calibre, having bagged the “Inventor of the Year” International award in 2016 at San Francisco. Honey Bajaj is a leader in innovation and product design. A designer and entrepreneur with extensive work in India and United States, she is currently a researcher at MIT and co-founder of Avir Technologies for humanising technologies for creating impact in the Indian healthcare system. She is known as the one who is behind the design of Embrace, a low cost baby warmer which has saved over 200,000 babies in the world. She was able to do this because she listened!

She learnt that every year 20 million premature babies are born globally and 450 of them die every single hour, and she decided to do something about it. The need was clearly an incubator which would be at a low cost and one not dependent on electricity. Listening to the customer passionately led Honey to an invention that saved 200,000 human lives and won her lots of accolades.

One more instance: A forester in Germany who spent over twenty years working for the forestry commission there, now puts his ideas of ecology into practice. Peter Wohlleben now runs an environment friendly woodland in Germany, where he is working hard to restore primeval forests. In his book, ‘The Hidden Life of Trees’, he writes “…trees need to communicate, and electrical impulses are just one of their many means of communication. Trees also use the senses of smell and taste for communication. ….”

He further writes, ‘The trees in a forest care for each other, sometimes even going so far as to nourish the stump of a felled tree for centuries after it was cut down, by feeding it sugars and other nutrients, and so keeping it alive’. How does Wohlleben know so much about forests and trees, so much so that his experience shared in this book often overtakes the scientific research done on trees so far? Because Peter has a deep love for woods and forests, where he listened, learnt and empathized with trees of all varieties. That led him to the knowledge of the amazing processes of life, death and regeneration of trees.

What do these stories teach us? What can we learn from the protagonists of these stories that we take to the business world – in HR and beyond? One of the oldest strategists of the world, a contemporary of Aristotle, existed in India – his name – Kautilya. Alexander III of Macedon, a protégé of Aristotle was unable to conquer India, largely due to the strategies of Kautilya. Having established the rule of his illustrious student Chandragupta Maurya, Kautilya also went on to document the principles of ideal governance, Leadership and Prosperous Nation in his masterpiece “Arthashastra”. In this brilliant work consisting of 15 Volumes, Kautilya offers counsel to the Leader in the Chapter “Rules for the King”. Using the masterful advice of Kautilya and the wisdom of the above anecdotes, here are some of the insightful questions which every Leader in Business must ask oneself:

The Listening Leader : What are the top Talent aspects that I need to know about – matters of productivity, wellness, engagement, learning aptitude and growth?

The Learning Leader: How is my Learning Agility? Am I considered a Thought Leader in my space? What amount of time am I spending on Learning and Teaching my young Leaders?

The Coaching/ Mentoring Leader: What is the direction and nurturing I am providing to my own team? Am I helping them develop capabilities for my own role, as a potential successor?

The Strategic Leader: How are we shaping up for the next wave of disruption? How may we lead the industry with our own disruption? What partnerships may help take us there? Who is an expert whose mentoring I can leverage?

The Customer Centric Leader: How can I raise customer experience to Stratospheric heights? Which capabilities will help us get there? How will our employees feel passionate about providing these experiences?

The Emotionally Intelligent Leader: Am I reflecting enough on my own strengths and limitations? How am I expanding my Leadership capabilities? Am I inspirational to others? How do each of my stakeholders perceive me?

The Culture Building Leader: What steps must I take to build our Physical, Digital and emotional infrastructure to make our organization more wholesome – one which is most sought after by customers and employees alike?

The Cost Conscious Leader: What models can we think of, which will create maximum out of minimum – what opportunities exist which can transform our largest expense heads? How can we cut down the leakages in all areas? How can Technology help achieve these?

The Sustainability Leader: How is my organization creating the highest good for the maximum people? How am I contributing to the nations and communities which we operate in? What are we doing to nurture the Planet?

In the chapter, ‘ Active Listening’, which appears in the book, “Coaching for Performance” by the acclaimed coach, Sir John Whitmore, the following paragraph appears:
The Chinese character for “listen” says it all:
Ear= What you use to listen (hear)
King= Pay attention as if the other person were king (obey)
Ten and eye= Be observant as if you had ten eyes (heed)
One= Listen with individual attention (attend to)
Heart= Listen also with your heart (in addition to ear and eye, hearken)
No wonder Active Listening is such a rare skill, but identified as a critical skill for the Coaching Leader.

What quality causes Leaders to listen more? Or, how can Listening aid Leadership?
Michael J. Gelb, the author of “How to Think like Leonardo Da Vinci”, decoded the genius of Leonardo Da Vinci and distilled it into seven essential principles. These principles, a must for leaders, starts with the first principle of:
Curiosita: An insatiably curious approach to life and unrelenting quest for continuous learning.

As the year, 2017 draws to a close, through this article, I wish the leaders, a year of
‘‘ Leadership, Mastery and Genius” ! Good luck…

Do you have a need that you’re struggling to fill? Word of mouth is the best recommendation. Let’s use our network in Talenttalks to share our connections and ideas. Join us for Needs & Leads on Friday 3rd July 2020 at 10:00. It’s free.

There is no passion to be found in playing small – in settling for a life that is less than the one you are capable of living.