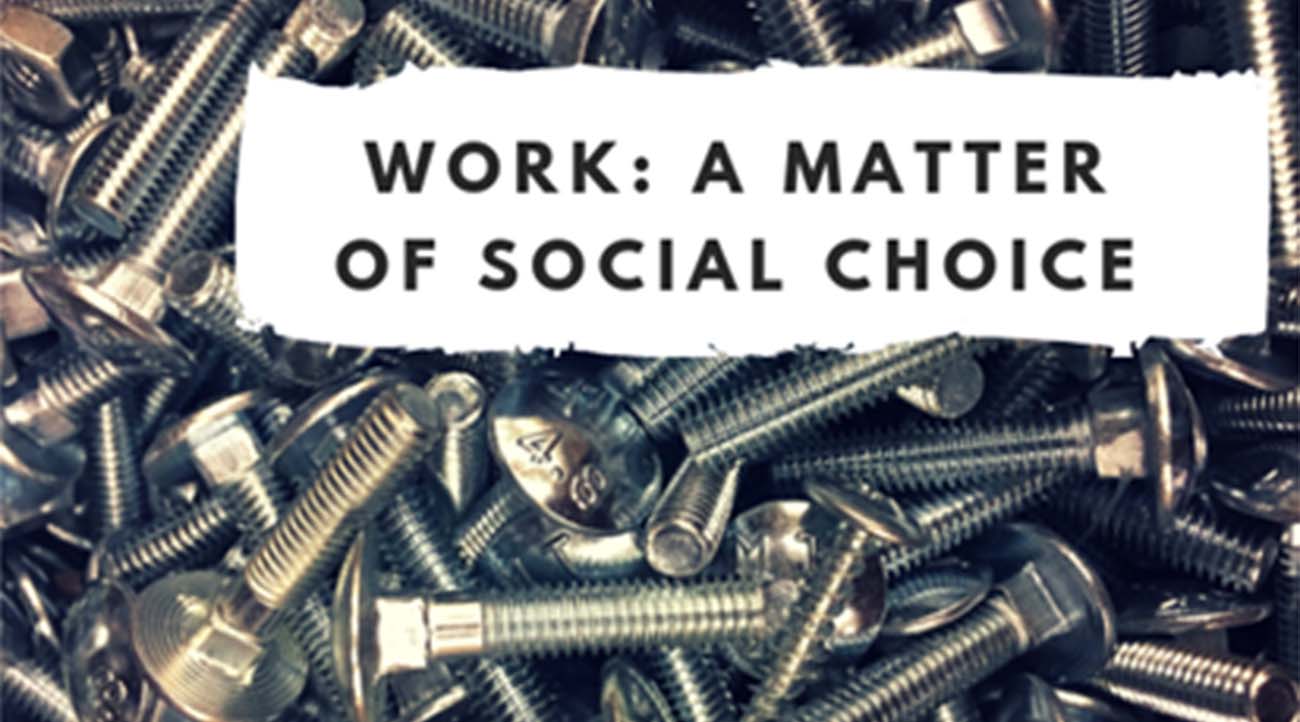 Work: A matter of social choice

Technological innovation does not drive social change. Rather, social change is usually driven by decisions we make about how to organise our world. These are the words of economic historian Louis Hyman. They remind us that the nature of work is a matter of social choice, the result of multiple decisions by us – companies and policy makers – and not the unavoidable consequence of technological progress.

Pre Industrial Revolution came what Hyman calls the ‘Industrious Revolution’. Independent workers, who previously had worked from where they lived or from a farm or shop, gathered under one roof in a supervised arrangement. People no longer controlled how they worked and they received a wage rather than sharing directly in the profits of their efforts. This signaled the first real separation between home and work life, and it set the conditions for the Industrial Revolution. Factory technology only worked because the relationship with work had already changed. Machines swept in and took advantage of and consolidated these changes.

A second industrious revolution has been underway since the 1970’s, when the collapse of a postwar era of secure wage-work began. In the 70’s a more strictly financial view of organistions took hold. Stock and bond prices were prized over production, short-term gain over long-term investment. “Lean” and efficient become fashionable, says Hyman. Workforces became expendable and jobs steadily became more temporary and insecure. This growing independent workforce has paved the way for today’s digital revolution. Online tech is swooping in this time, and there is a workforce ripe to take advantage of it. Without this workforce, apps and freelance sites would never work.

For some, new digital economies offer lands of milk and honey with greater autonomy, flexibility and independence that traditional jobs don’t or can’t offer. However for many, job ‘freedom’ spells a tear in the obligation between worker and employer, it signals insecurity and risk. Gig-economy work comes in two forms, “web-based” working from anywhere, and “location-based” working in the physical world via apps. The evidence is growing that these jobs do not deliver the financial returns needed to make ends meet. Over the past two years, pay for gig work has dropped. Many workers are barely making a minimum wage toiling for giant tech platforms, according to JPMorgan Chase Institute and ILO research. Should these gig jobs be offered by huge tech companies that provide outsize returns to shareholders even if they don’t turn a profit? Hyman urges us to think about this. Our norms and policies need to make digitization benefit today’s workers, and not ‘work’ them over.

Technological progress does not make work insecure, our social choices do.

As we stand upon the precipice of the 2020’s, we are witnessing a ‘purpose’ revolution. Purpose is not a new concept. In the 1940’s, legendary concentration camp survivor and psychiatrist Dr Viktor Frankl shared his learned wisdoms with us: ‘A man who has a why can bear almost any how.’ We have seen a surfacing of purpose as a concept at work in multiple ways over the years, called by many names. I believe it should be disrupting work, and that it will do so over time. For that reason I am marginally encouraged to see purpose play out on our rather drama-heavy conference stages. Yet, I cannot help but wonder: has ‘purpose’ become the darling of our business chats because it’s another tool in the war for profit, just as “lean corporation” was touted 40 years ago by business gurus?

Or is it a genuine response to our deep knowing that purpose drives the person, that it is the human condition to create meaning, and that creativity and purpose may be the real drivers of a future work that works for many more of us, whatever form work takes? What will the consequences of our social choices be?